Abra’s CEO Just Put 50% of His Investment Portfolio Into ... 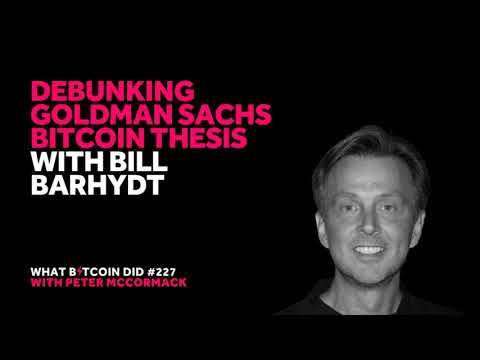 Bill Barhydt, CEO and founder of the Abra digital finance wallet and exchange app, said he sees Bitcoin’s (BTC) blockchain struggling when it comes to on-chain mass adoption of the asset as a store of value, given the asset’s current technology.  “Bitcoin can certainly scale ‘off-chain’ today via third-party custodians such as exchanges and wallets […]

After changing roles several times since its 2009 launch, the current line on Bitcoin (BTC) calls it a store of value comparable to gold — a status with which Abra CEO Bill Barhydt agrees.  “Today Bitcoin is best used as a store of value that will become more and more uncorrelated to traditional investing markets […]

Exposed: How Bankers are trying to centralize and highjack Bitcoin by buying "supporters" and promoters (like OpenBazaar team) for the B2X (S2X/NYA) attack on Bitcoin.

*Open Bazaar was crossed-out after their S2X support retraction, see edit at bottom.
These guys have deep pockets, but as you will see below, they are funded by even deeper pockets.
We can't leave this to chance or "the markets to decide" when there is such a malicious intent to manipulate the markets by those powerful players. So that's why all the people saying: "Don't worry, S2X won't happen" or "S2X is DOA" need to stop, we are at a 'make-or-break' moment for Bitcoin. It's very dumb to underestimate them. If you don't know yet who those malicious players are, read below:


We need to keep exposing them everywhere. Using Garzik as a pawn now, after they failed when they bought Hearn and Andresen (Here are the corrupted former 'good guys'), they are using the old and effective 'Problem-Reaction-Solution' combined with the 'Divide & Conquer' strategies to try to hijack Bitcoin. Well, effective before the current social media era, in which hidden motives can be brought to the light of day to be exposed.


Public pressure works when your profits depend on your reputation. The social media criticism worked for companies like Open Bazaar, which after weeks of calling them out on their S2X support, they finally withdrew it.
Please contact the companies on these lists if you have any type of relationship with them, we have just a few days left until the fork:

(See edit at the bottom)
B2X (S2X/NYA) is nothing more than an open attack on Bitcoin, not an "upgrade" as they want to sell it. This attack has no 'consensus', at all. It was "agreed" by a bunch of miners and corporations behind closed doors, with no community nor developers support. Only miners and a few millionaires that stand to profit from the B2X attack support it. The vast majority of the Bitcoin community is totally against this attack on Bitcoin. Most of those companies are under DCG group:

Can we talk about "Abra" again?

I know there are a lot more interesting things going on at the minute but I feel the need to bring up Abra again.
As a skeptic since I heard of Abra before it launched I'm even more skeptical after a conversation I had with Abra CEO Bill Barhydt. However I'm not here to make claims against Abra or disclose what was said in that conversation.
I bring it up again as while it has raised $20m to date its gearing up for a series B soon with a much higher valuation which I believe to be valued on incorrect information.
I want to find out how much the bitcoin community here knows,
-About Abra
-How it works
-Personal opinions on it
I'm trying to get a feel for how the community feels about Abra before I state my issues with it in a long form medium article.

Speculation about the Launch festival 2015 overall winner ABRA. What technology stack will they be using?

The founder and CEO Bill Barhydt mentioned it will be on bitcoin/blockchain and the value will be stored in a combination of btc + derivative smart contracts. I really hope they would use counterparty for this. What other likely possibilities are there for them to use? The app is great, and seems to be something which could really bring the blockchain for mainstream use.

It’s Day 17 of the Crypto World Cup and our second day of the round of 16! Charlie Lee faces off against Bill Barhydt, plus Tyler Winklevoss takes on CryptoYoda. It was two wild games today, with some pretty surprising results. Let’s dig in! If you missed it, here’s the summary of who’s playing in the round of 16. Over the past month, bitcoin has entered something of a bearish state, and has been struggling heavily. The currency initially reached the $12,000 line in August and had most traders excited for the future. Sadly, it looks like the currency has hit something of a snag ever since, and ultimately lost more than $2,000 from that price. While the currency has recovered somewhat and is now trading ... Bill Barhydt, CEO of Abra, Now Has 50% of His Net Worth in Bitcoin. Commenting on Twitter, Barhydt, who used to work at the CIA and NASA, said that 50% of his investment portfolio is now in Bitcoin: “A few weeks ago, I increased my ownership of #Bitcoin significantly and it’s now 50% of my investment portfolio. Quick take. 1 minute read. Bill Barhydt shows his bullish attitude towards bitcoin. Is it truly the best investment opportunity right now? Bill Barhydt, the co-founder and CEO of the crypto company Abra sent out a tweet last week claiming that he has significantly increased his holdings in bitcoin in October.. In an episode of “money talks“, the CEO talked in more In-depth about his ... Bill Barhydt: We need real-world applications, ABRA, for example, scaling infrastructure, the picks and shovels businesses all to kind of work in concert so that they’re adding complementary value. ABRA doesn’t have a plan B. We’re all in on Bitcoin, right? Peter McCormack: Mm-hmm (affirmative)-Bill Barhydt: So we need the core roadmap to ...

Bill Barhydt is the Founder & CEO of Abra. In this conversation, Bill and Anthony Pompliano discuss Abra's recent announcements, the need for better banking globally, how Bill sees Bitcoin ... Looking to file your crypto taxes? Check out TaxBit! https://app.taxbit.com/invite/DataDash/ Today, we're talking to Bill Barhydt, the founder of Abra, a new... Bill Barhydt (Founder & CEO, Abra) discussing the contract design underlying Abra's operation as a non-custodial crypto-collateralized investment application at the 2019 MIT Bitcoin Expo. In this interview, I am joined by Bill Barhydt, the CEO and Founder of Abra. We discuss and debunk Goldman Sachs' arguments against Bitcoin as well as the reasons behind their lazy research. Bill from Bull Flag Group interviews Bill Barhydt from ABRA to discuss all things Crypto! Abra is a mobile app which allows users to buy, hold and sell 30 different coins and tokens. The users are ...